If you see someone driving around with a Medal of Honor license plate, the vehicle may not necessarily belong to a recipient of the military’s highest honor for valor.

Retired Army Master Sgt. Leroy Petry, who received the award in 2011 for risking his life to save fellow Rangers in Afghanistan in 2008, says someone stole the plate off one of his vehicles last week while it was parked at the Seattle-Tacoma International Airport.

“So yesterday I noticed that someone stole my Medal of Honor plate from the front of my vehicle while parked at Seatac airport last week while I was visiting the troops in Ft. Eustis VA,” said Petry, 41, in a post on his Facebook page. “I had the security screws so someone must have really wanted it. Probably some Call of Duty gamer or PX Ranger. #StolenValor.”

Neither Petry nor Seattle-Tacoma International Airport Police immediately responded to requests for comment.

Petry received the Medal of Honor for heroics during combat on May 26, 2008, near Paktya, Afghanistan, during which he distinguished himself by conspicuous gallantry.

He received the Medal of Honor on July 12, 2011, from then-President Barack Obama for saving the lives of fellow Rangers when he picked up a grenade and threw it away from them during an intense fight. He was on his seventh deployment and assigned to D Company, 2nd Battalion, 75th Ranger Regiment.

He had already been shot through both legs when he saw the enemy grenade and instantly knew the danger.

Get the military’s most comprehensive news and information every morning

Sign up for the Early Bird Brief – a daily roundup of military and defense news stories from around the globe.

By giving us your email, you are opting in to the Early Bird Brief.

“This husband and father of four did something extraordinary,” said Obama during the award ceremony in 2011. “He lunged forward, toward the live grenade. What compels such courage?”

Petry’s right hand was traumatically amputated during the fight and he now uses a state-of-the-art prosthesis, which allows him amazing dexterity. 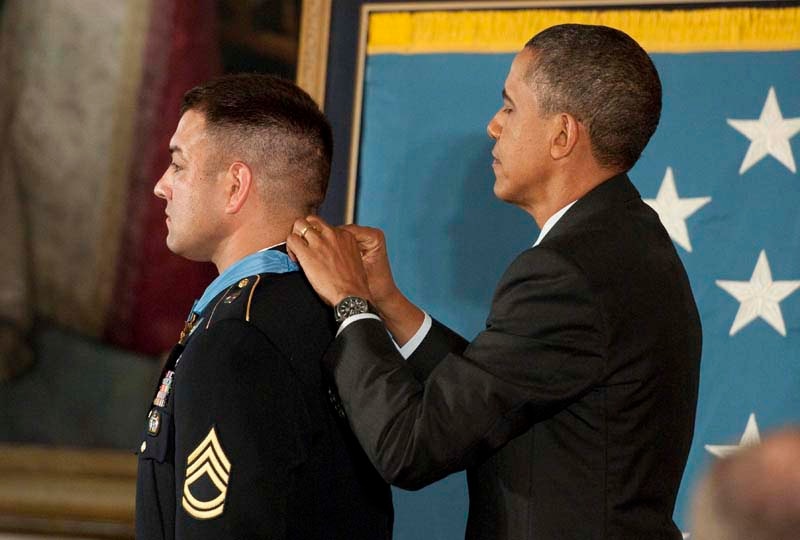 Sgt. 1st Class Leroy Arthur Petry is awarded the Medal of Honor for conspicuous gallantry at the risk of his life, above and beyond the call of duty, by President Barack Obama at a White House ceremony in Washington on July 12, 2011. (J. Lee/Staff)

In his 15 years in the Army, he has been a grenadier, squad automatic rifleman, fire team leader, squad leader, operations sergeant and a weapons squad leader.

One of the Army’s most recognizable soldiers, an iconic figure of heroism with a prosthetic hand, he has sought to share the spotlight with fellow soldiers.

He had originally planned to stay in the Army for 20 years or more. After a medical board last fall, and continuing to deal with results of his injuries, he decided it was time to retire.

Petry was promoted to master sergeant and retired in a ceremony at Joint Base Lewis-McChord in 2014, three years after receiving the nation’s highest award for valor.

Add Noqta to your Homescreen!