A squad leader who was sentenced to life in prison for his role in the murders of three unarmed Afghans a decade ago filed a lawsuit in federal court Tuesday to have his convictions vacated.

The lawsuit presents conflicting testimony disputing the role Staff Sgt. Calvin Gibbs played during the 2009 and 2010 Maiwand District murders, and argues that the failure of Gibbs’ defense counsel to present the testimonies violated his constitutional right to a fair trial.

The crimes were among the most horrendous of the Afghan War, revealing details of body mutilation, pictures of soldiers posing with corpses and the routine smoking of hashish among some Stryker brigade troops at Forward Operating Base Ramrod in Kandahar province.

This is the first time these testimonies have been brought to civilian court and out of the military justice system, said John N. Maher, an attorney representing Gibbs. However, the testimonies conflict with those of many other soldiers close to the incidents, and an Army appeals court that heard the testimonies two years ago upheld Gibbs’ conviction.

Had the witnesses been introduced during the 2011 trial, the “jury could have found Gibbs not guilty of the six most serious charges — three conspiracies to commit murder and three murders,” Maher said. “All of the witnesses are open to testifying if needed. However, that will probably not happen in the near term, unless there is a new trial at some point.”

During sentencing, Gibbs said he regretted collecting human trophies, which included fingers and teeth of slain Afghans, but denied involvement in the first and third murders. He maintained that the second killing was lawful.

Portions of that argument are backed by two fellow soldiers, according to the latest lawsuit. A third man — the whistleblower who brought the crimes to light — testified that he heard conversations between Cpl. Jeremy Morlock and others to frame Gibbs so that they could obtain better deals with the prosecution for themselves, according to the court filings.

Morlock pleaded guilty in exchange for a limitation on his sentence to 22 years confinement.

Sign up for the Army Times Daily News Roundup

Sign up for the Army Times Daily News Roundup to receive the top Army stories every afternoon.

By giving us your email, you are opting in to the Army Times Daily News Roundup.

“The crux of the prosecution’s case was based squarely on Morlock’s testimony that Gibbs generated the idea of killing noncombatants and covering up the killings as lawful combat engagements,” the court filings read. “Although Morlock initially told CID during a videotaped interview that he did not witness Gibbs commit any offenses, Morlock later testified at trial that Gibbs gave him a grenade to toss at the first Afghan, resulting in the first murder.”

Murder of an unarmed Afghan at Kari Kheyl

Morlock testified that Gibbs shot an unarmed Afghan man and planted an AK-47 as a “drop weapon” to make the killing look like a “good shoot,” which was the second killing. During the third, Morlock testified that Gibbs shot an Afghan man in the head twice after other members of the platoon tossed a grenade at him. Gibbs was not directly involved in the first killing, according to multiple accounts.

One witness, Spc. Michael Wagnon, testified that the second killing was a legitimate use of force during a clearance operation in the village of Kari Kheyl, according to the federal court filing. While securing the outside of a compound, rounds began impacting near Gibbs’ head. Gibbs returned fire into a room before Wagnon entered with a belt-fed machine gun from another angle.

“I came around his backside and was scanning as I was bringing my barrel around him. As I came around him, I saw a guy standing pretty near the corner,” Wagnon’s sworn testimony reads. “I see the guy standing there with his gun and he’s kind of stepping back at the same time. I’m assuming he was being hit by some of Sergeant Gibbs’s rounds and so as I came around I brought my gun up and I engaged.”

Wagnon’s testimony runs counter to the generally accepted narrative: He, Morlock and Gibbs agreed to isolate an individual in the town, kill him and plant an AK-47 that was taken from the Afghan National Police on his body. That allegation was backed up by Staff Sgt. Kris Sprague, the first person to respond to the gunfire.

“As with any complicated, multiple-witness trial, there are inconsistencies in the testimony and evidence presented,” an opinion by the Army Court of Criminal Appeals from 2018 reads.

“Sprague was an AK-47 enthusiast and recognized the weapon by the Afghan as a Hungarian AMD 65 that was used by the ANP,” the opinion reads. “No other weapon or ammunition was found in the compound. He initially noticed the weapon was on safe and later, when clearing the weapon, determined it did not have a round in the chamber.”

Staff Sgt. David Bram testified later that Morlock, not Gibbs, had an AK-47 that could have been used as a “drop” rifle to frame unarmed Afghans, according to the lawsuit. Bram received a 5-year sentence in 2011 for his role in the killings. 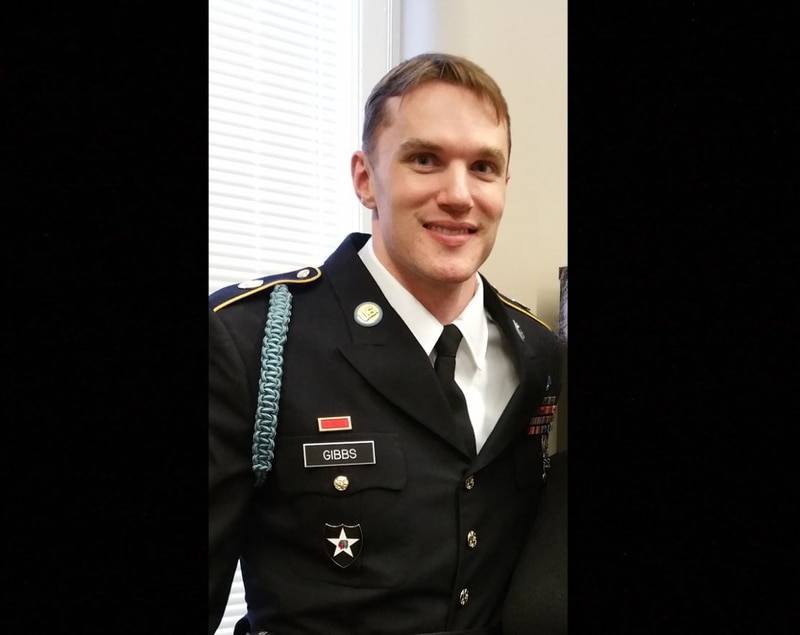 After the squad searched and took biometric data from the body, Gibbs cut off one of the slain Afghan’s fingers with a pair of trauma shears to keep as a trophy. As the platoon left Kari Kheyl, they came under direct and indirect fire from mortars and small arms.

The Army appeals court affirmed the past decisions against Gibbs in 2018. The court’s opinion stated that the additional testimony would have been cross-examined at trial and weighed against the “substantial inconsistencies” within Gibbs’ own testimony. Bram’s testimony, while “sufficiently believable,” also confirms that an AK-47 was intended to be used as a “drop weapon,” the opinion added.

The Army appeals court decision paved the way for the case to move to federal court and out of the military justice system.

The new federal lawsuit also recalls testimony from Spc. Justin Stoner, the soldier who ultimately blew the whistle on the three killings. Stoner was the soldier who testified that he heard Morlock argue that Gibbs should be the “fall guy” as the senior enlisted member of the criminal activities.

The Army appeals court wrote that there was “a remarkable lack of platoon discipline” during the deployment.

The unit regularly experienced improvised explosive device attacks, but soldiers were frustrated by their inability to capture “squirters” — suspected Taliban fighters fleeing from engagements on motorcycles. Their frustration, combined with a lack of proper authority over the soldiers, created a situation in which drug use was condoned, though Gibbs did not use drugs himself, according to the court.

Gibbs was far from the only NCO or officer who failed to reign in troops. The court noted that at one point, a platoon leader allowed members of the unit to mutilate an Afghan corpse and take pictures with the body.

The court wrote that the idea to kill noncombatants was plotted by Morlock and Gibbs after the two commiserated about an IED attack that took the leg of a well-liked NCO in the platoon.

“Prior to the attack, the NCO had volunteered to go on the patrol while [Gibbs] remained at the FOB,” the Army appeals court wrote. “[Gibbs] felt remorse for not going on the patrol. … [Gibbs] resented not only the Taliban and enemy insurgents, but Afghans in general.”

Gibbs eventually told Morlock that on his earlier deployment to Iraq he unlawfully killed the occupants of a vehicle at a checkpoint and managed to get away with the incident, according to the Army appeals court. The two then discussed fabricating similar “scenarios” like planting “drop weapons” and detonating grenades to make it appear as if the murdered Afghan had thrown the explosive device, the court wrote.

They eventually brought other soldiers in the unit into their planning and suggested committing the murders in pro-Taliban villages against military-age males.

“Ultimately, [Gibbs] contacted an NCO from another unit on the FOB and obtained a crate of grenades without going through his platoon’s resupply system,” the opinion reads. “[He] did not add them to his platoon’s accountability records. In December 2009, appellant gave CPL Morlock one of these off-the-books grenades.”

In mid-January 2010, Morlock and Pfc. Andrew Holmes, who was ultimately sentenced to seven years in prison, implemented the grenade scenario, according to the court. They killed a 15-year-old boy after framing him for dropping the grenade.

The second killing at Kari Kheyl village occurred roughly one month later. Then the third incident took place in May 2010. The platoon was patrolling a village called Qualaday when an elderly Afghan man was detained by Gibbs and two others, according to the court’s opinion. Gibbs threw a grenade at the man, blowing apart his legs, after which Morlock and a third soldier, Spc. Adam Winfield, shot him, the opinion stated.

Winfield received three years in prison for involuntary manslaughter. Under his plea deal, he didn’t admit to the killing, but instead said he fired his weapon away from the man.

Add Noqta to your Homescreen!